The famous ‘Shambles’, the Minster, the Roman walls, ghostly goings on and a Viking history – yep, a visit to York should be on your bucket list.

Nestled where the Rivers Foss and Ouse meet, York is the heart of ‘God’s Own Country’ – North Yorkshire – and one of England’s most visited cities; it takes just one visit to see why.

I’ve been lucky enough to visit York on countless occasions over the years; it’s around an hour and a half from my home in Manchester, whether by car or train – so it makes perfect sense that it’s one of our favourite places to spend a weekend away.

If you’re planning a trip, read on to see what you can expect to find in this bloomin’ wonderful city!

York is full of medieval streets, but The Shambles is one of the oldest. 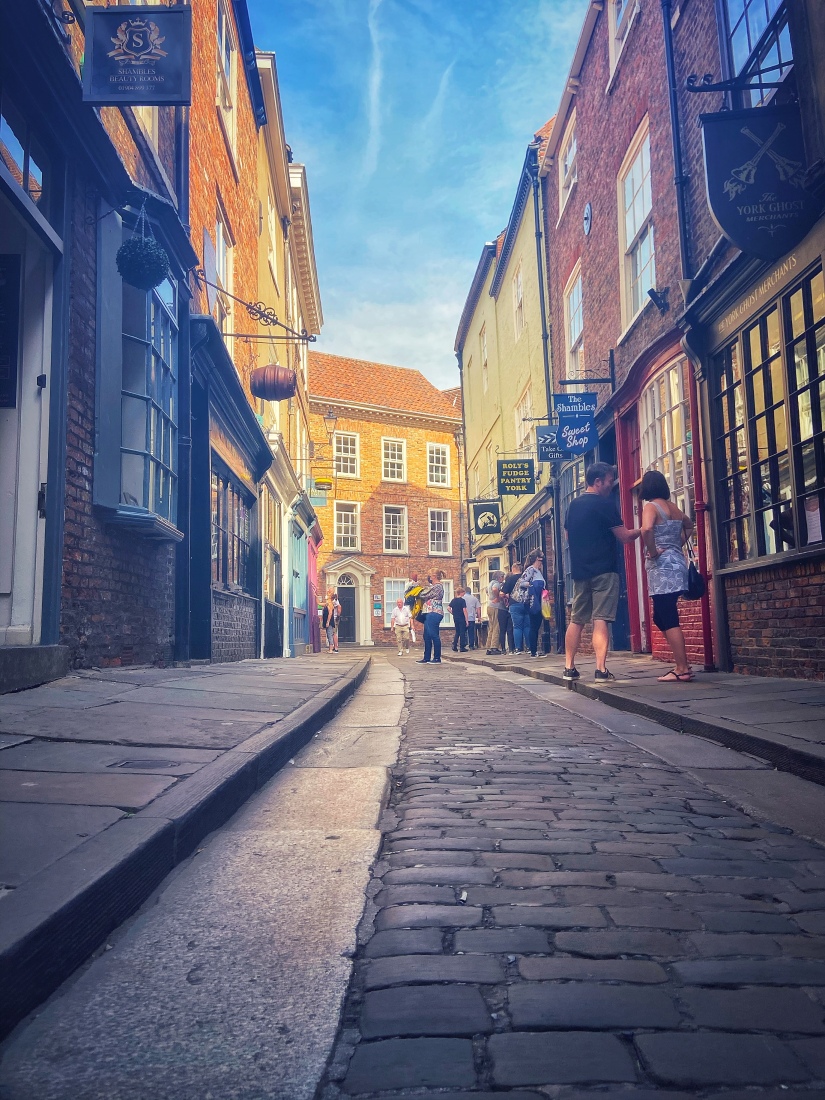 Originally called ‘Fleshammels’ – an Anglo-Saxon term meaning ‘Street of the Butchers’ – today the Shambles is the most famous part of the city. You don’t even need to go looking for it, because all of the sudden, there it is.

Spot the narrow, cobbled alleyways and you’re at The Shambles. The oldie-worldy timber-framed buildings house little independent shops selling anything from homemade fudge to old fashioned antiques – and go down the hidden snickets to find tea rooms and cafes.

It’s little wonder that Harry Potter fans, young and old, flock to The Shambles – it looks like it comes straight off the film set.

Of course, York capitalises upon this, with Harry and co souvenirs at ‘World of Wizardry’, ‘The Boy Wizard’ and ‘The Shop That Must Not Be Named’. Don’t forget to park your broom before going inside…

And for those serious Potter fans, ‘Potions Cauldron’ even has a ‘Wizard Experience Room’ where a master wizard will guide you through the art of making potions for just £4.99 per student (no goblins allowed).

It certainly has its fair share of ghostly tales, thanks to the city’s history of violence, gore and torture during the reign of the Romans and the Vikings. From nuns that haunt backstage at the royal theatre – to Roman soldiers who roam pub cellars – and vikings who walk the walls in the dead of night – there are apparently over 500 gruesome hauntings in the city….that we know about, at least!

So it goes without saying that obviously York has a ghost tour or two on offer to all eagle-eyed Egon Spengler’s.

I can’t say that I’ve ever partaken in a ghost tour myself, but I’ve had a drink in one or two of the most haunted pubs in York.

The Guy Fawkes pub is just a stones throw from the Minster and is said to be haunted by the main man himself. Dark, dingy and lit only by candlelight, it’s my favourite pub in the city, by far. If you get a seat, you can consider yourself quite lucky.

And there are more drinking holes where the spirits aren’t just the ones behind the bar. If ghost-hunting is on your agenda, visit the following pubs with an open mind (and a change of pants, just in case): The Golden Fleece, the Red Lion, the Snickleway Inn and the Lamb and Lion. 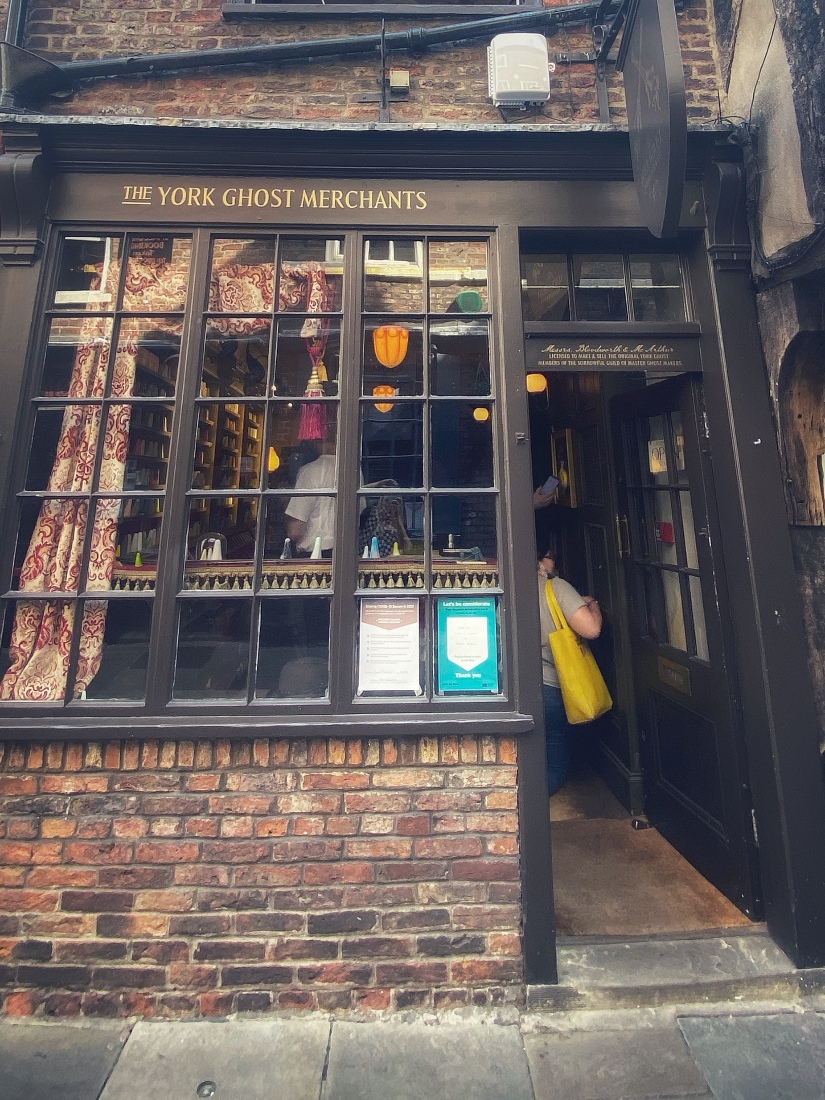 If you’re looking for a ghostly souvenir of your visit to York then look no further than the Ghost Merchants where you can pick up your own, unique, handcrafted ghost for under twenty quid….

Ask anyone what the second most iconic York landmark is after the Minster – and they’ll tell you it’s Cliffords Tower.

For a small sum of £6.50, you can climb the steps up to the castle ruins and get the best panoramic views in the city. It’s a really interesting site to spend an hour or so as it used to be a prison and a royal mint, as well as William the Conquerors York Castle. A word of advice, if you’re unsteady on your feet or you suffer with vertigo, it’s probably not for you – the stairways are pretty steep!

(Put your money towards a souvenir ghost instead!)

Did you know?….The Romans founded York and its surrounding areas in around 71 AD and it became the military capital of Northern Britain. They called it Eboracum, meaning ‘place of the yew trees’. There – some trivia for your next pub quiz.

By 100 AD (or thereabouts) the stone Roman fortress was in place around the city, home to the Roman Army HQ.

As civilians came to Eboracum over the years, it developed into a colony before declining around 400 AD due to unkempt roads, abandoned buildings and a lessening population. And the rest, they say, is history.

You can walk around the city walls which follow the line of the original Roman walls in around an hour and a bit, depending on how quick you walk, of course. At this elevated height, you will see the city from a whole new perspective – and be afforded the opportunity to have a nosey through the windows at some of the town houses! 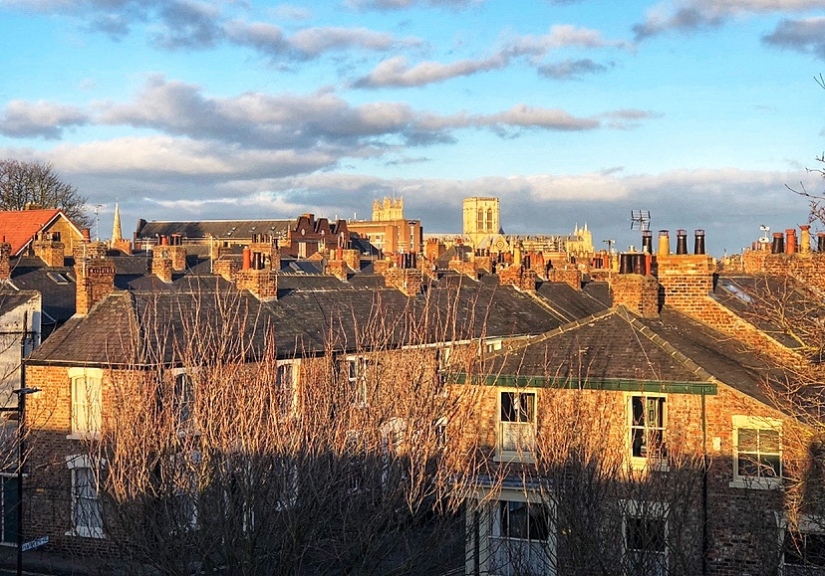 Okay, I’m not a historian so I’ll canter past the Anglo-Saxon years and go straight to the Vikings in the late 800 AD. Vikings are more exciting.

Fighters by nature, this new army captured York and from then on it was as known as Jorvik – the Viking Capital of England!

The Viking history is still very prevalent in York, with Norse-derived street names like Coppergate, Stonegate and Micklegate.

Visitors can learn more about York’s Viking past at the popular Jorvik Centre, which is open all year round. Just try not to get stuck behind a school trip! Again, queues can be long so book ahead. Admission won’t break the bank, at just £12.50 per adult.

History lesson over – now to the important stuff. Where the ‘eck do you get a cuppa and a slice of cake round here?

The most well renowned dining experience in York is undoubtedly Betty’s Tea Room. It’s been in St Helens Square since the 1930’s and is as popular today as it ever was. I can speak from experience, Betty’s Afternoon Tea is a very worthwhile treat for anyone with a sweet tooth!

Be warned, if you’re fancying a bit of Betty’s, be sure to book ahead well in advance because the queues go all around the building, no matter what time of year it is. It’s that popular. 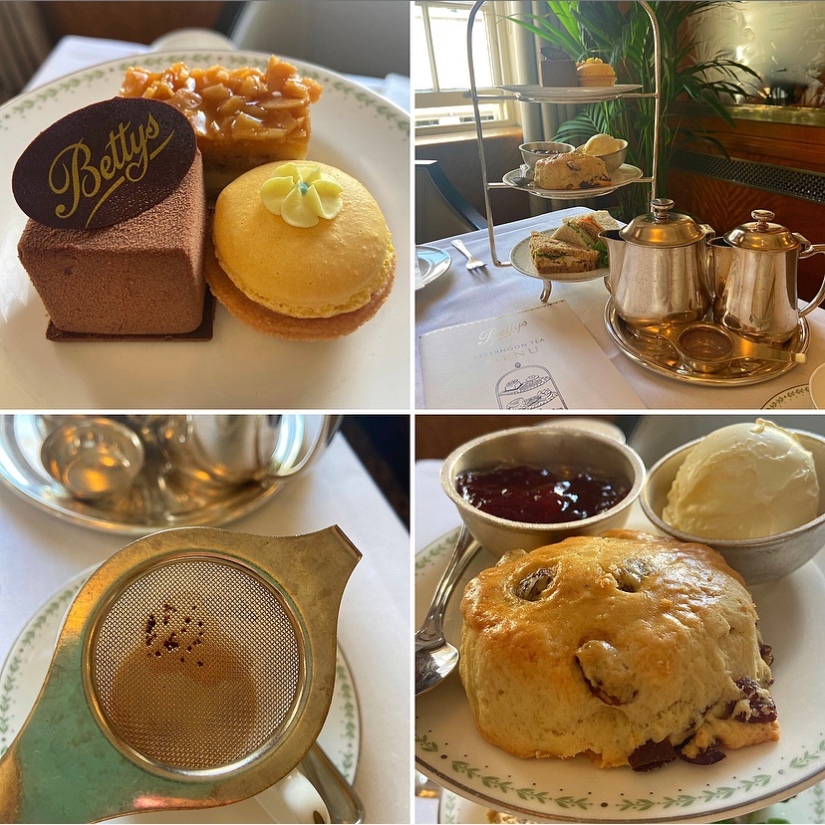 If you can’t secure a reservation and the queues resemble something at a theme park, don’t worry too much because you can still pick up a cake from their takeaway cafe on Stonegate.

And if that’s too busy, worry not, because York probably has almost as many tea rooms dotted around the city as it does ghosts. Almost.

You’ll love just strolling around York and taking it all in. It’s not just a place for cake connoisseurs, historians and ghost-hunters – it’s pretty good for shopaholics too.

Aside from the many eating and drinking establishments, the museums, the archaeologist sites and the quirky shops you will find in The Shambles, you will also find some of the most popular high street stores. Shoppers will find Debenhams, Boots, The Body Shop, Pandora, Primark, HMV, Office, The Works – pretty much all that you’d want when out for a day’s shopping.

In between stores, you can also pick up some handcrafted goods from street-sellers and enjoy some street entertainment from Yorkshire’s finest buskers and human statues. There’s plenty to see on each street corner.

Tip: Don’t forget to ‘look up’ when you’re walking around the streets of a York – if you look carefully enough, you’ll find many a hidden figure or gargoyle in the eaves. How many will you spot? 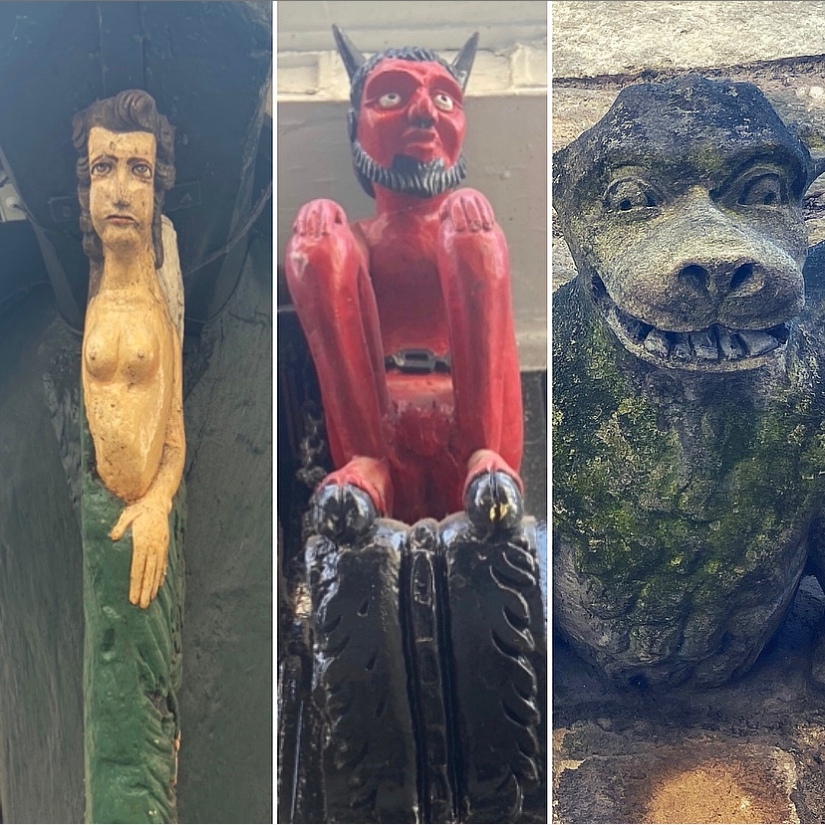 There’s little better than a meander along the River Ouse on a sunny day in York, ice cream in hand. Who needs the French Riviera eh? 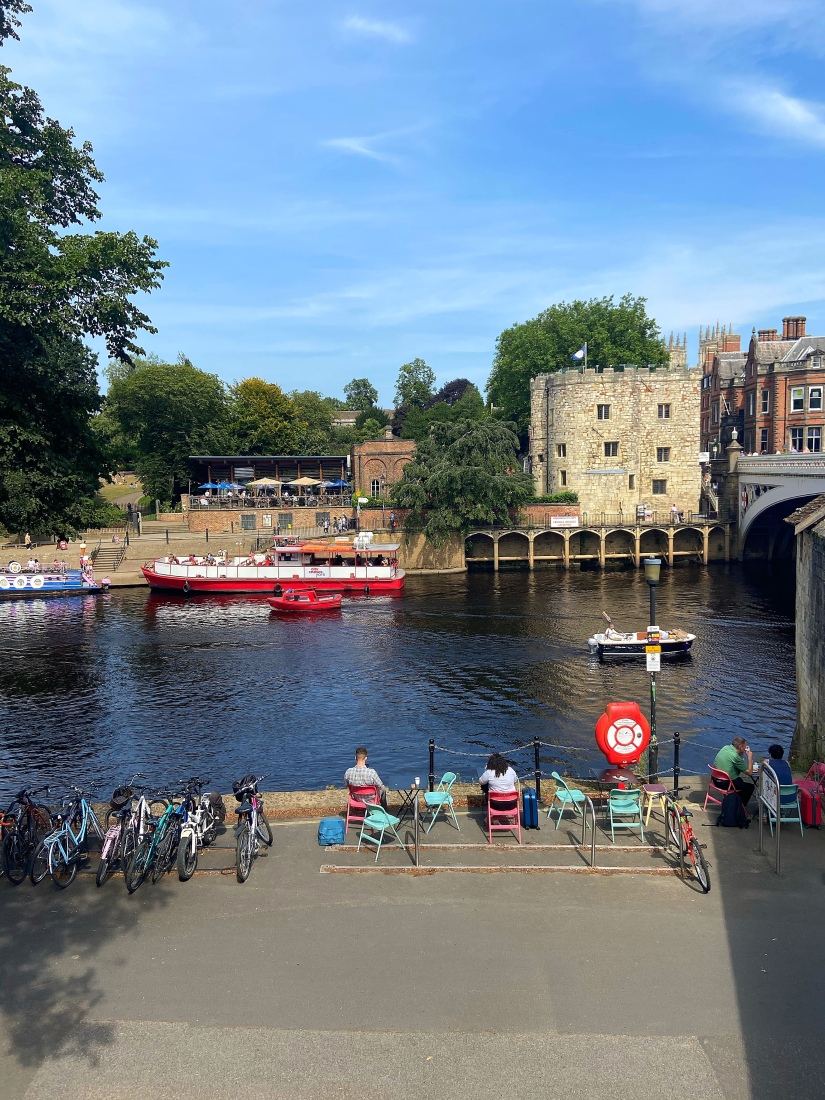 As well as seeing the local Yorkshire folk enjoying a cycle or a jog, you will see York Millennium Bridge, York Castle, Rowntree Park and Tower Gardens along the route. If a river cruise appeals more than a river walk, York has that too! 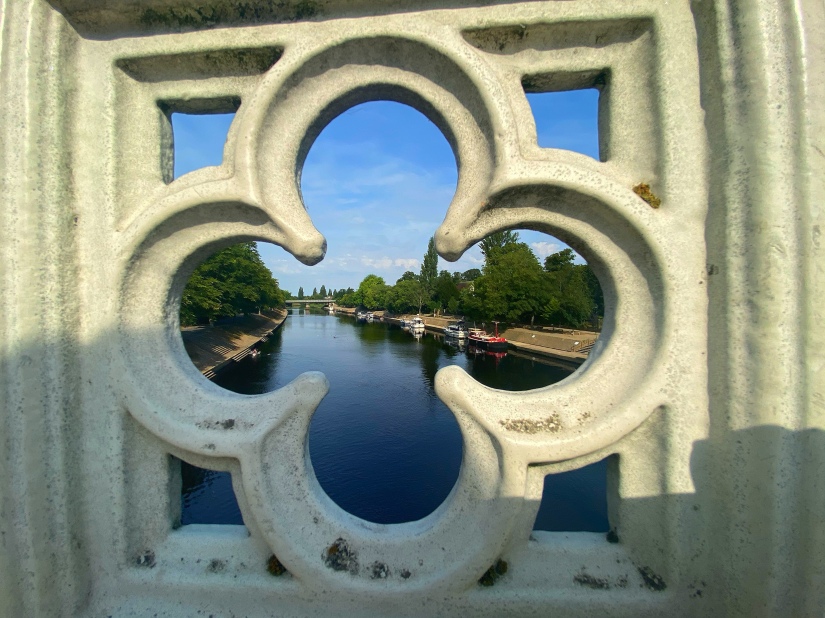 There’s so much to see, do, eat and drink, I couldn’t possibly list it all as I’d be here all day – but to give you some more ideas of things to do, try googling the following:

My recommended pubs and eateries:

The Lamb and Lion pub

My favourite place to stay:

Thanks for reading! If you like this blog, check out my other travel stories on my website: The Girl With A Suitcase