It’s become something of a tradition over the last decade that my friends and I go for a weekend away when one of us hits a milestone. With my 40th birthday less than a month away, we squeezed everything into our cabin cases and headed to Catalonia’s Capital City for a few days….

A not so warm welcome!

You could be forgiven for thinking that Spain is hot all year round. Not true, however. I had planned to pack my summer dresses and flip flops but a last minute weather app check told me I’d be better off with woolly jumpers and boots! Good job I checked because as we stepped off the plane we were hit by a snappy cold blast – not exactly the lovely wave of heat I had hoped for. Still, the sky was blue, the sun was shining, we had a weekend of fun ahead – and it was November after all!

Our home for the weekend.

After a lot of online research, we finally decided to stay at the ‘Hotel Petit Palace Museum’, just off La Rambla. What a perfect little find this turned out to be (well done Jo!) – central location, super-modern and best of all – a welcome bottle of bubbly and chocolates waiting for us since they knew we were celebrating my Birthday. Customer service at its finest!

We shared a triple room which was spacious and clean, with a host of gorgeous smelling toiletries, a fab power shower and a great view of the theatre. If you’re looking for a well-priced, well-recommended hotel for your own trip, look no further than Petit Palace Museum! You can also use the complimentary bicycles at reception if you fancy seeing the city by saddle!

After checking in and ditching our cases, we headed straight out to acclimatise. 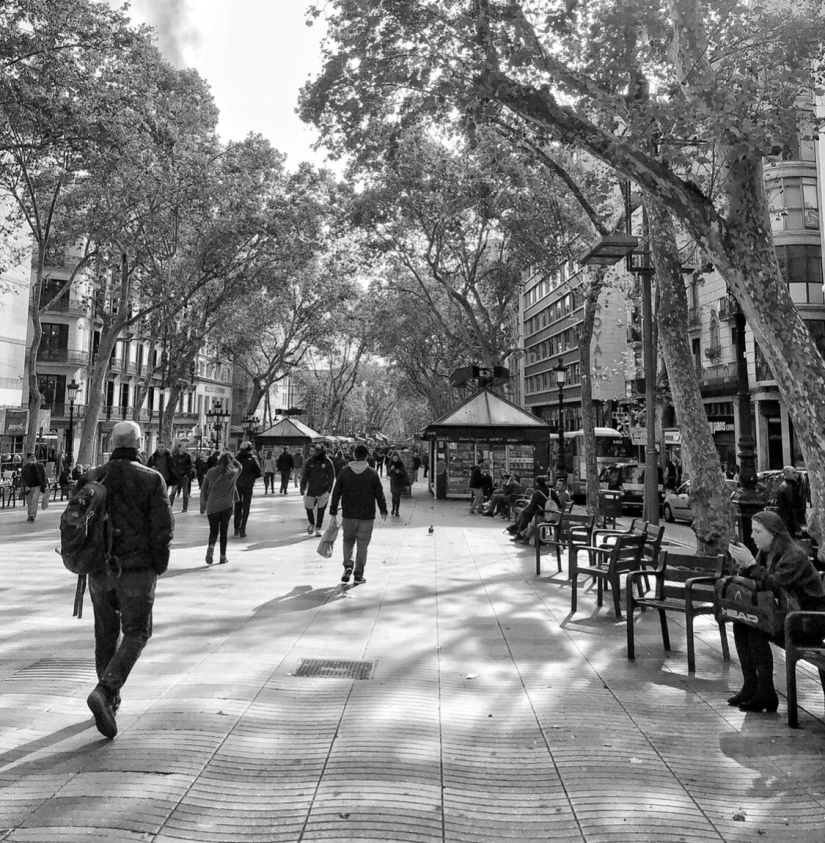 La Rambla is Barcelona’s most famous street, connecting the heart of the city to the waterfront. This pretty, bustling, tree lined boulevard has a mix of stunning architecture of all shapes and sizes, eateries of all cuisines, shops, cafes, flower stalls and touristy souvenir kiosks. Apparently there was once a caged bird market too, but thankfully this closed down in 2010. You won’t find any traffic driving down the centre of La Rambla, this is purely a space for pedestrians (although there are roads to either side for the cars and mopeds).

Before we arrived in Barcelona, we had heard that it has a reputation for pickpockets. Fortunately we did not witness anything untoward, but it’s worth packing a good crossbody bag and your wits!

As with any tourist hotspot, La Rambla is also home to all manner of street performers – from human statues, to street buskers, to giant kings and their queens (not your everyday sight!).

Also on La Rambla, near to the Opera House, is another of Barcelona’s most iconic sights – La Boqueria. This large, vibrant, indoor market is both full of life and full of edible treats to suit all tastes. It also has a great ceiling!

La Boqueria is crammed to the rafters with stalls selling meat, seafood, vegetables, nuts, cheese, fruit, spices and all things sugary. If you have a craving for something tasty, this is the place to go! Some stalls also encourage you to sit down and have a meal, so if you’re hungry enough, that’s an option. Despite its central location, the prices in the market are surprisingly reasonable; €2 fruit smoothies, €3 wraps, €5 paella….I got a ‘cone full’ of delicious serrano ham for just €2. What a bargain!

From the market, we continued down La Rambla towards the water where we couldn’t fail to miss the 60 metre tall Columbus Monument. This impressive sight plays homage to where Columbus returned to Spain after his voyage to the Americas. He is said to be pointing East towards his home of Genoa, although there’s some speculation as to whether he is actually pointing West to the ‘New World’. 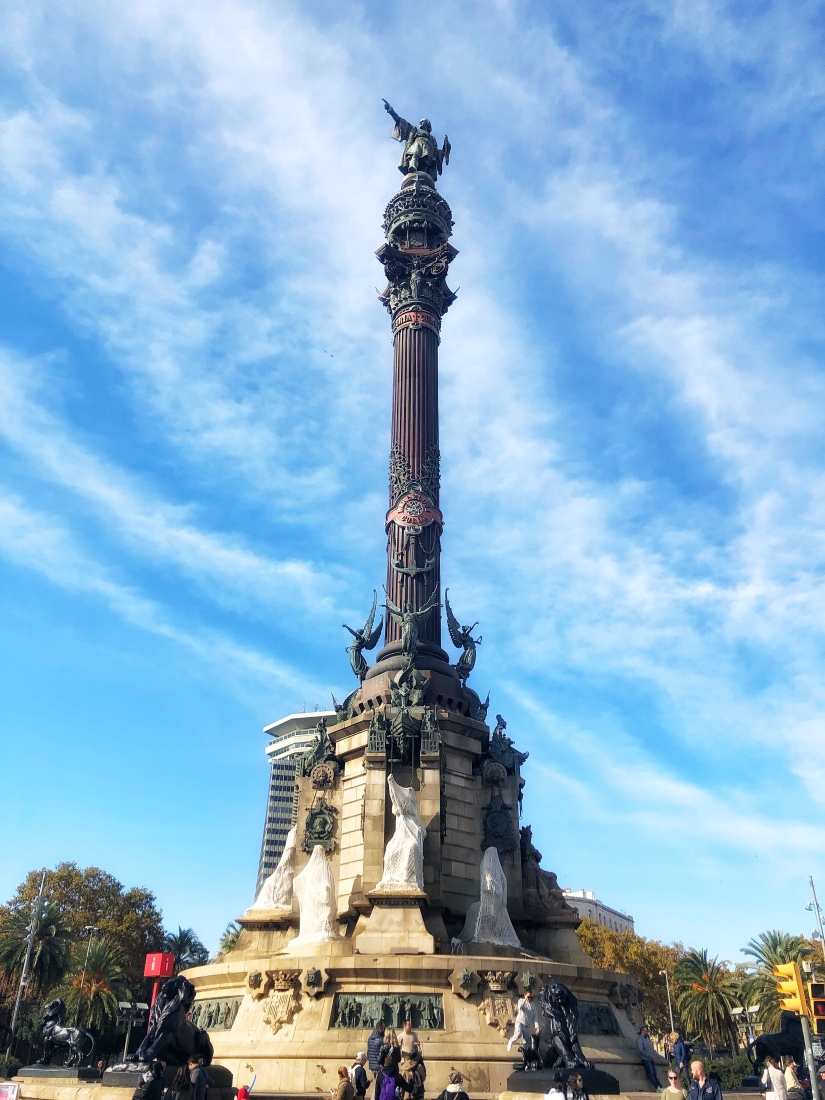 Port Vell (Old Port) is a pretty marina with yachts, ships and fishing boats. Although we didn’t venture too far in, this is where you can find a popular shopping centre/ outlet, the Barcelona Aquarium and the Barcelona World Trade Centre. We stopped by a cute little antique market, selling old Spanish trinkets (and an Abbey Road Beatles LP for good measure). 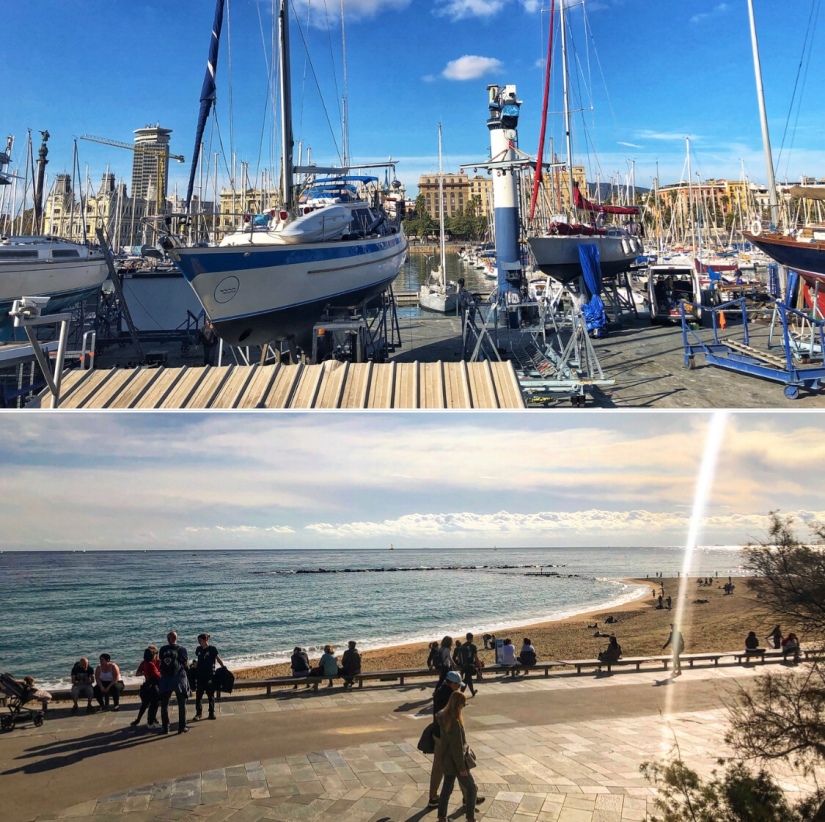 Not only is it a busy city, but Barcelona has a beach too! If you have the benefit of a longer stay than we did – and better weather – why not take a short walk from Port Vell to Barceloneta Beach for an afternoon at the seaside? We managed to catch a glimpse of the beach from the Hop On Hop Off bus….but more of that later.

Did you know? La Rambla is a name that comes from an Arabic word meaning ‘dry riverbed’. Almost every city in Spain’s Mediterranean Coast has a dry riverbed, but Barcelona’s is the most iconic. 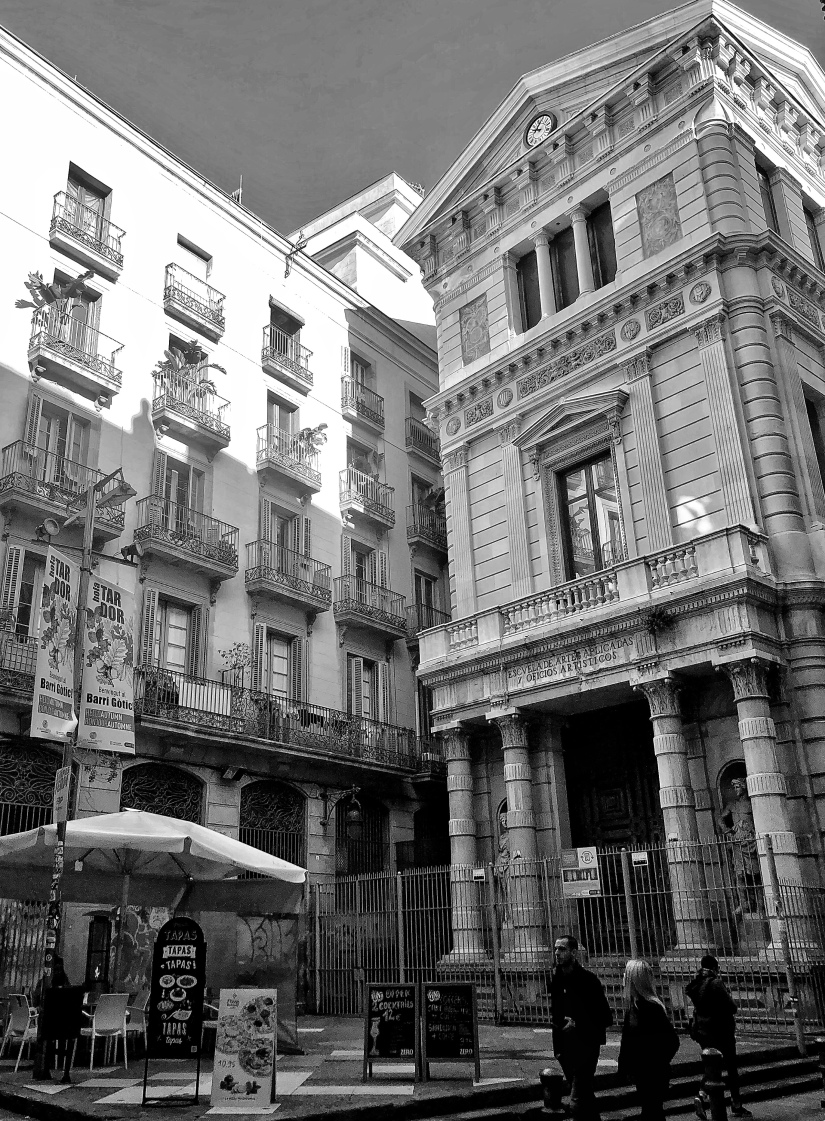 Barri Gotic can be found just off La Rambla and it’s the most historic part of the city. It is full of oldie-worldy cobbled streets, narrow alleys, ancient medieval churches and some fantastic dining and drinking holes! It was just what we were looking for to enjoy a cheeky Friday afternoon tipple (or two).

With thanks to a top recommendation, we found El Bosc De Les Fades Cafe (meaning ‘Fairy Forest’). I’ve never experienced a bar quite like this one before; it was almost like being inside an enchanted wood; dark and atmospheric with nooks, crannies, toadstools and stalactites galore. Even the tables and chairs were gnome-sized – and yet, the wine wasn’t! Salud!

We also stumbled upon the 4 Gats Cafe (a Catalan expression meaning ‘only a few people’). The cafe opened in 1897 when a young Picasso used to frequent there, paintbrush in one hand, coffee in the other. Inside the cafe is also a copy of the famous painting ‘Ramon Casas and Pere Romeu on a Tandem’, painted by Casas himself, specifically for the cafe. The original now sits happily in a museum.

It wasn’t just the painters that favoured the 4 Gats, the famous Spanish architect Antoni Gaudi was also a fan, back in the day.

One thing’s for certain: if you hadn’t heard of Antoni Gaudi before visiting Barcelona, you definitely will have by the time you leave.

Gaudi’s extraordinary designs were inspired by his passion for architecture, religion and nature. He was hugely respected under the Modernista movement of neo-Gothic art in the late 19th/ early 20th centuries and his masterpieces – which are dotted around the City – still draw in massive crowds. The most famous Gaudi piece is Basilica De La Sagrada Família, a large Catholic Church with intricate gothic carvings. Strangely, it has never been finished – and probably never will be.

Casa Battlo, in the heart of the shopping district is also a Gaudi favourite. The colourful ceramics and uniquely shaped windows were inspired by the sea – and you can see this quite clearly. Once the home of the Battlo family, today you can go inside Casa Battlo if you can get a ticket. Be quick because this is one of the most popular tourist attractions in the whole of Spain!

If a ‘Gaudi House Hunt’ makes it onto your itinerary, you might like to take a trip to Park Güell on Carmel Hill to see some of his most fun designs (think Gingerbread houses and Hansel and Grettel). 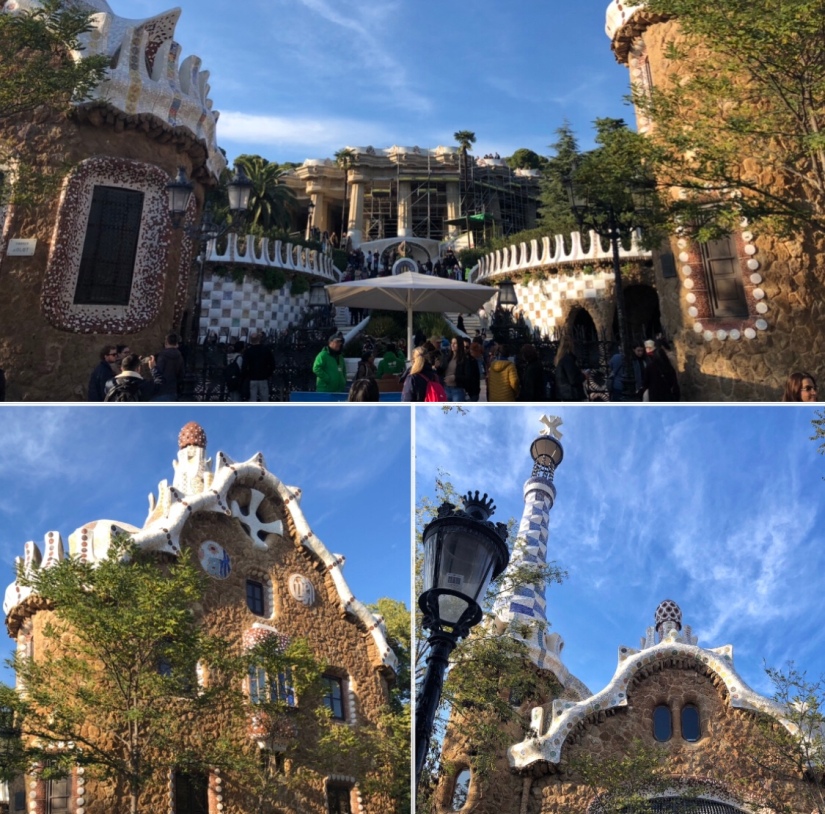 And whilst on the subject of the park…..

If seeing as many of the sights as possible is something you want to incorporate into your trip, you’d be well advised to jump aboard the Hop On Hop Off bus. There are two companies that operate but we chose the ‘Barcelona City Tour’ which runs two routes. €30 for one day/ €40 for two – we opted for the latter which turned out to be a good idea. 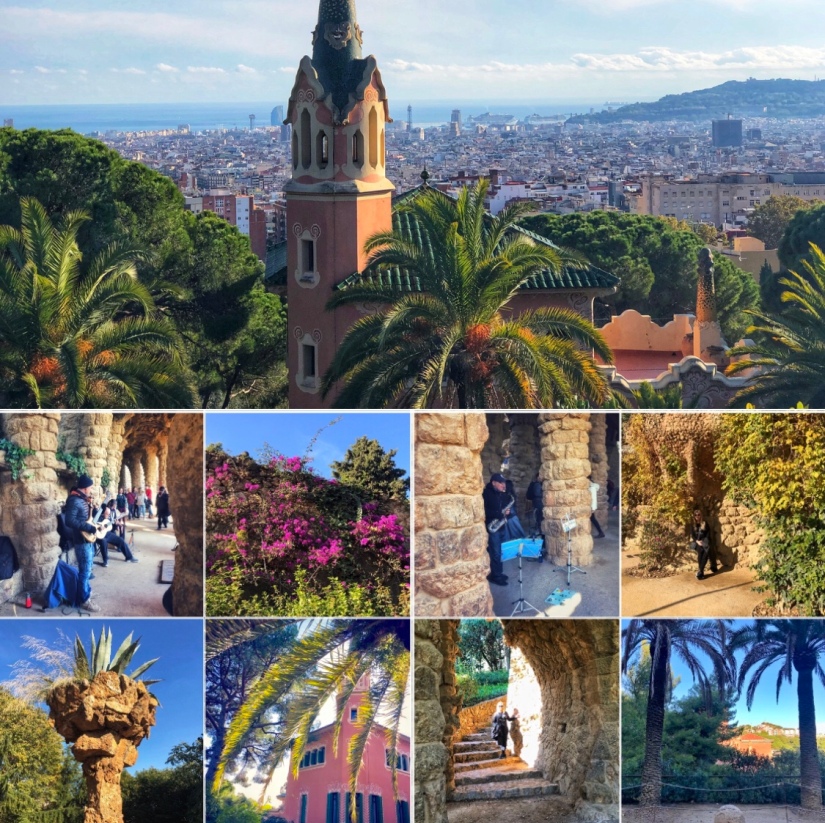 We spent a good couple of hours on our second day just strolling around the stunning Park Güell. This lush green space set high into the mountains is a World Heritage Site. Opened in 1926, it was designed by Antoni Gaudi who was commissioned to ‘be creative’ by the owner, Eusebi Güell.

Here you will find fantastic panoramic views across Barcelona, musicians playing to small crowds, the Gaudi Museum, souvenir sellers and an array of hidden passageways that you won’t tire of photographing.

I love indulging in food and drink when I’m abroad and since Spanish tapas (and sangria) is one of my favourites, I was really looking forward to this aspect of the holiday. I’m not vegetarian, but my friends are – which meant that we selected eateries that catered for all of us. It also meant that I got to try places I probably normally wouldn’t such as ‘Honest Greens’ on La Rambla (word of warning, their prices are low and their portions are huge!). We must have picked well because there wasn’t anywhere that we didn’t like.

So, if you’re veggie – or your fellow travellers are – here’s some fab, centrally located restaurants that you might like to try too…..

We dined alfresco under the heaters at Catalana and enjoyed a range of tasty tapas, montaditos and a jug of sangria, whilst watching the world go by. Just be careful to watch your valuables if you eat outside as there are some rather dubious folk hanging around.

At €3 for a wine and €4 for a massive portion of pesto hummus and vegetables, who can complain? Not me. We stopped at Honest Greens for a late lunch – but you could easily have a main meal here as the vegetable bowls, made to your order, looked marvellous! 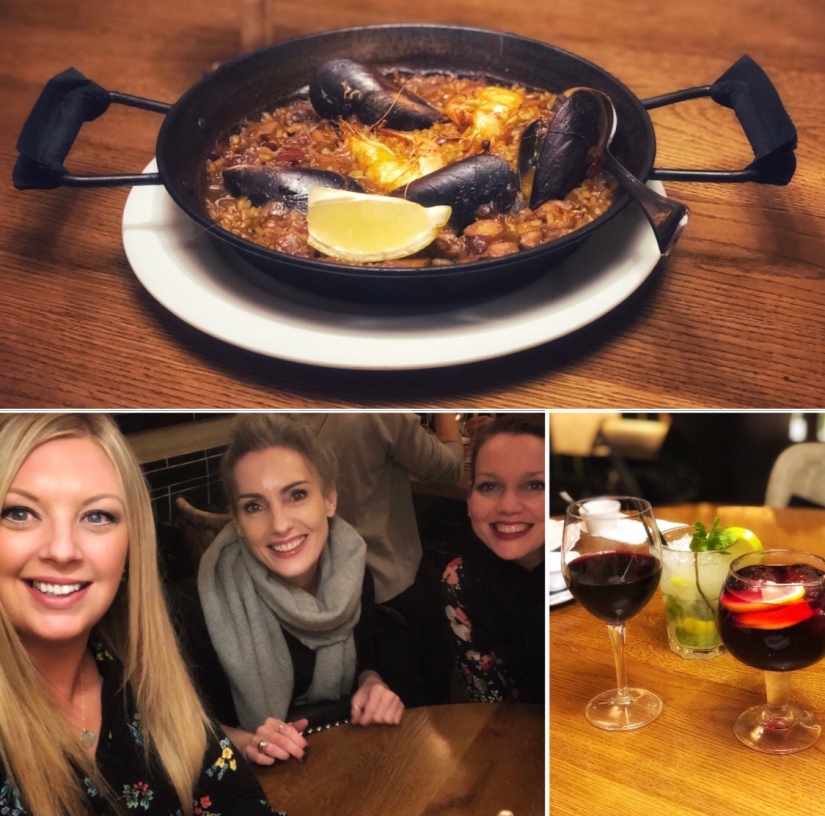 If you want to spend one of your nights in an upmarket restaurant, dining under the chandeliers, surrounded by fine wines and where you can watch the chefs cook your dinner in front of you, you could do worse than Taller De Tapas. I had a lovely seafood paella here, freshly prepared.

And after all that nice food, it was time to see some more sights….

Having had a couple of days on our feet, walking and exploring, we decided to spend our last day sitting on the top deck of the Hop On Hop Off bus, taking in the sights, minus the ‘hopping off’ part. This time we would take the ‘orange route’, West. 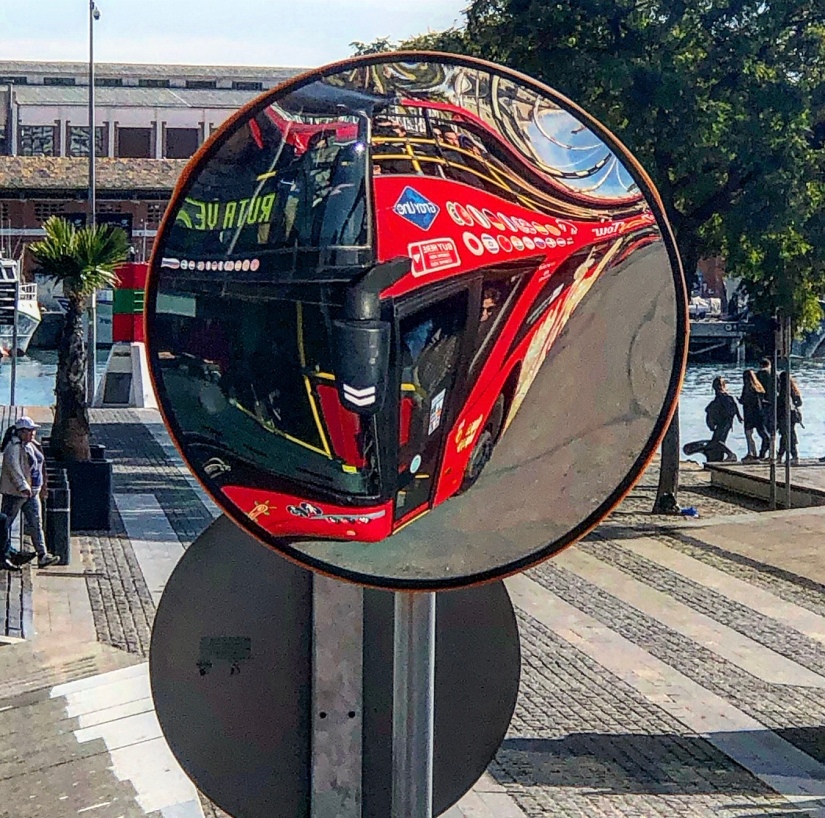 The bus took us high into the Montjuic mountain with amazing views of the busy city below. This reminded me of typical ‘holiday’ Spain, with bright, colourful villas, sweeping countryside and steep climbs.

The two hour tour took us around lots of interesting places that we perhaps wouldn’t otherwise have seen, such as the Olympic Stadium, Poble Espanyol, Parc De Montjuic and Plaça De Sants.

We also passed by Camp Nou Stadium, home to Barcelona Football Club – and let’s face it, what visit to Barcelona is complete without seeing this famous stadium, if even just from the bus?

With only a few hours before we had to depart for the airport, we decided to head back towards the hotel and grab some food (I always find this is a far cheaper and tastier option than eating at the airport). We stumbled across yet another great place, Turia, this time in the Eixample area. Tapas, wine and relaxation for our last hour in Barcelona – the perfect ending to a fabulous weekend. Maravilloso!

Have I you tempted to book your next holiday to Spain? Oh go for it – you only live once!

Maybe you’ve already been to Barcelona but want to explore more of this wonderful country? I can also recommend Seville. Read my blog here to see why for yourself. 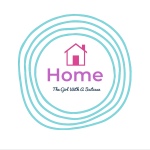